The Knight and the Witch Pt.6

A couple of days later the whole kingdom were leaving the palace. The celebration had been the weirdest thing ever. No mass, no dance, no food, no licor, nor any of the reasons the village used to like those kind of events. The only interesting for them was the morbid of watching Sir Heath and th Witch Unk been declared husband and wife by the Wise Alix. “Nothing church related” She asked King Arthur.

The weather didn’t help at all, the whole place got covered with a thick fog and all got dark. Even the flames that were supposed to light up the place turned from orange to black. The only thing that was still remain lightning the kingdom was the moon on the sky and even the moon seemed to hid for moments behind frightening clouds.

Everything was done already and Witch Unk had went to their chambers As soon as the ceremoni ended. 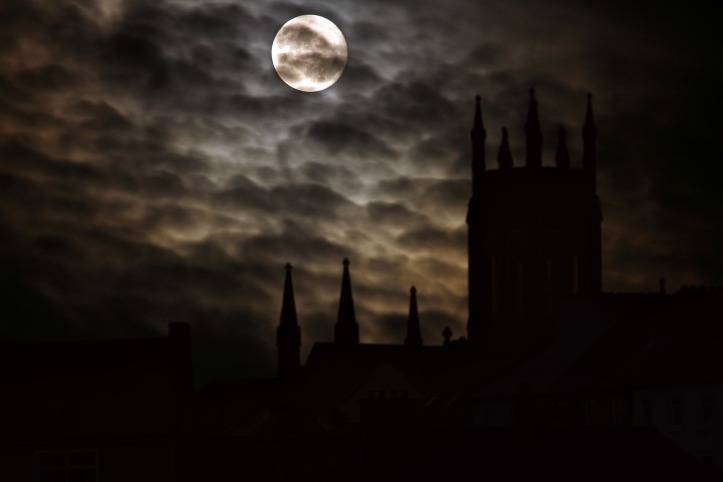 -I am not sure If I should congratulate you. – Said King Arthur trying to make Sir Heath feel a bit beter.

-Just kill me for treason to the kingdom or something, please. – Sir Heath mocked. – What am I going to do?

-Well the common thing in this situations is to spend the wedding nigth together, nevertheless, taking on count this had been the weirdest wedding ever I am not sure what is supposed to happen next. -Said Queen Ophelia playing and serious with a worried smile on her face. – Maybe If you just do what she said she would not be as bad as she seems and she looks pretty old, maybe she won’t last that long. -She left a little chuckle come out.

He smiled hopless, parted company and walked as slow as he could towards their chambers. Finally in front of the door he just stood for a moment before opening the door, took a deep breath and got in.

The door complained and Sir Heath couldn’t believe what he was looking at. Right at the edge of the bed there was sitting the most beautiful woman he had ever seen, half-naked in front of the window, the moon on the outide illuminated her making his heart beat and breathing to speed up.

Sir Heath shook his head squeezing his eyer in order to come back to reality. The Honorable thougth she might could had cast a spell on him as he wished when he remembered what King Arthur told him about her turning into a cat. Sir Heath swallowed and walked in closing the door behind him.

She looked at him over her left shoulder.

-Unk? It is you? – He asked walking slowly towards the bed.

-You had been so sweet with me. – She said with the most gentle and sensual voice he had ever listened. -Because of this I wanna offer you something, but I need you to answer a question. -She paused turning to him. -Half of the time I’ll look this way and the other half of the time the way I looked before. -She approached him seductive. – Which one do you prefer for the nigth and which one do you prefere for the day?

When she got right in front of him the sweetest aroma reached his nose making him close his eyes while inhalating it, she put a finger over his mouth caressing his lips. Sir Heath tried to ignore the advances focusing on her question. That surely it was a test so he took her hand gently thinking about what would it happen under both situations and how would it affect her behavior towards herself, towards him and everybody around.

He closed his eyes and kissed her hand but now it was wrinkled and bony. The words the queen had told him moments before got to his mind.

-I want you to be the one who chose over your own life. -He said opening his eyes.

The ugly witch he was holding hands with now, turned into the beautiful woman once more right in front of him.

-Because you had gave me what every women want, now I am going to look this way day and night. – She told her with the sweet voice kissing him next.