The Martian Roving Vehicle (also called M.R.V.) stopped suddenly at the entrance of the Cave making 辉煌(HuiHuang) shook a bit from his seat. The heated motor growled for a moment filling subtly the empty silence in the Red Planet while he waited for instructions.

-Positive, Maj. , confirmed. Over. -Gabriel Capellan was the one on charge of the comunications at the Falcon9 Station floting over the Red Planet. He and a group of 7 other people from different nationalities were in charge of monitor and coordinate activities on the outside of the Van Allen Belts* between the Dragon, on the surface, the Falcon1 at 36,000 km from the moon and California.

-Thanks Gabe! And stop calling me Maj. Stay on stand by. – Grumbled Олег with a mocking tone. -Ursa, can you please let him know? We need a CR Scan and the levels of XTP-3.

At the Entrance of the cave 辉 was waiting for instructions nervous on the M.R.V., that wasn’t supposed to happen. The speaker in the helmet crunched loudly making him jump in his seat.

-辉, you there? – Ursa’s voice used to sound heavenly to his ears, but this time it made his heart beat off his chest for different reasons.

-Where I was supposed to go? You guys told me to wait here, remember?

-We need an XTP-3 complete and the CR from the inside. Over.

-Ok then, I’ll keep you informed. Over – 辉 left a sigh come out as signal of stress. – Are you coming?

-No way, just yell if you need me. – Said Danielle with a subtle french accent.

The entrance of the cave was a around 5 by 3 meters and the inside was barely visible, just a couple of metters inside the ligth got lost letting the darkness fill the place. 辉 turned on the light in his helmet and started walking inside completely scared. Why didn’t they got the signal before? Maybe even since they still were on Earth. Thirty meters inside there still nothing but an empty tunel, the scaners hadn’t recived any signal nor bipped once. “Maybe it was only a fail on the Falcon9” He tried to convice himself hoping to find nothing. The lamp started lightening a rock in the middle of the tunnel and when he finally got to the rock noticed the tunel was already divided in two in front of him. 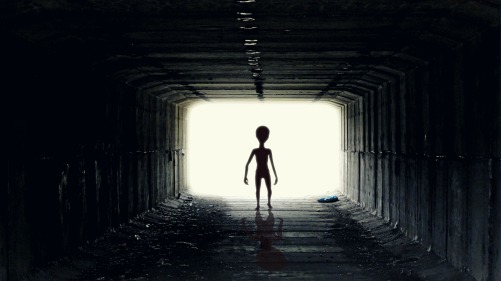 Not even Danielle was able to listen him just a few meters outside. The Scaners didn’t mark anything, 辉 hesitated if going back and make Danielle go inside with him or continue by himself. The sensors on his sleeves made a bip sound making him jump for the third time in the day and on the screen of the suit a graphic appeared with a line in red going up and down as crazy. One hundred and eigthy beats per minute.

-Mother f…, – Squeezed his hands interrumping himself – You aren’t helping keeping me calm!

The right seemed the less scary path and decided to keep on advancing by himself. 辉 turned around and the big entrance was starting to look small now, he noticed the M.R.V. standing by the door with Danielle on it and continued walking inside not convinced at all. –They are watching everything. – He said to himself. The weird tunnel seemed to be following a new empty path on a 45 degrees angle from the middle rock when suddenly a rock wall in front of him appeared making him follow a new turn to the left on a 90 degrees angle. Ten meters ahead the XTP-3 scaner went crazy with the levels of hydrochloric acid. One more scare jump after 辉 decided he was suffering diabetes now on. The lamp light up a strange looking rock when the CR scaner made a loud bip sound.

He was expecting that one. Checked the scaner before making a closer inspection of the rock – Is really that what the Falcon9 sensors detected? – He mumbled. When he raised the head noticed the rock, was dressed…

-What the fu…- His eyes oppened widely and a little rock behind his feet made him fall down when he tried to went back.

Ten metters in front of him it was laying down a looking like human skeleton dressing a weird suit that was holding some sort of knife and a feet away from the skeleton there was a small metallic cube that ligthen the cave for a second with a green light making the scanners went crazy and stop immidatelly. Shaking, mouth open, 辉 started crawling backwards and ran away back to the M.R.V. as fast as he could…

*The Van Allen Belts, is a zone of energetic charged particles, most of which originate from the solar wind that are captured by and held around the planet by that planet’s magnetic field.